The scratching is temporarily not available.

The video is temporarily not available.

Racehorses are our prized assets at the Singapore Turf Club. They are the key elements in the game of horse racing. These athletes need to be properly taken care of and looked after to ensure optimum performance in races.

Not everyone has the chance to work with these unique animals as closely as stable staff does. At least, it’s cooler to hang out with horses than computers all day!

Curious about our horsey business? Here’s a peek at the life of a stable groom. 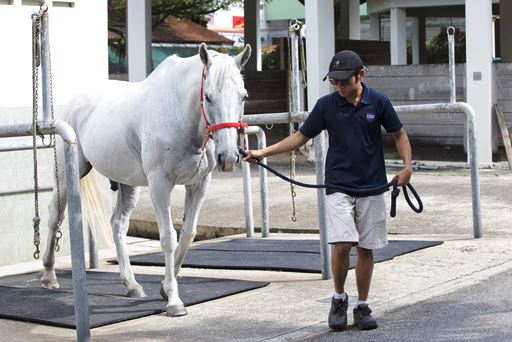 Stable groom Robin Peck can never forget the days he used to watch horse racing on the television with his grandfather. The thrills of seeing a horse win races left such a deep impression on him that he dreamt of becoming a jockey, which eventually led him to where he is now.

The 23-year-old Singaporean, who has a diploma in electronics, computer and communications engineering from Nanyang Polytechnic, worked in the marketing field previously.

It was a fairly stable job but Peck was after a different kind of “stable” job.

He made up his mind his life was with horses, but he felt that he needed to start somewhere to fulfill his dream.

After completing his National Service last year, Peck looked up online and joined the one-month course for stable grooms under the STAR (Singapore Training Academy for Racing) Programme in February without hesitation, much to the surprise of many of his friends.

Grooming horses, walking them, bringing them for swims, saddling, feeding and cleaning up their boxes are part and parcel of a stable groom’s (also known as a syce) daily duty.

Currently working under trainer Bruce Marsh, Peck is assigned to three racehorses at the yard. Every day, he reaches the stable before 6 am, and ends work at 4.30pm, with a break between 10am to 2pm. Peck only gets one Sunday off every two weeks, but he is not complaining.

“I always knew I wanted to be in racing, and even if it takes time for me to learn from scratch, it doesn’t bother me as that gives me time to build relationships with my horses,” said the Pasir Ris resident who has to wake up at 4am for work.

“My grandfather is happy of course, and my parents are supportive, but they would tell me to be careful too.

“I enjoy my work because the teamwork here (Marsh’s stable) is great, and other syces are helpful too.

“The first thing I learnt about horses is that despite their massive frame, they are actually easily spooked by unfamiliar sounds, and would rear up and what not. I’m not afraid of such situations; instead, I see it as a challenge I should overcome.

“To be a syce, you have to be adaptable, observant, and you must also be willing to listen to other people’s advice.”

And if all goes well, Peck will be heading to the STC Riding Centre this April where he will take up horse riding lessons to progress up to the next step of his career ladder – becoming a track rider.