The scratching is temporarily not available.

The video is temporarily not available.

Ask either Norfazli Satle or Hidayat Sudirman what is the one most important quality a farrier should possess, and they will tell you “patience”.

Six years ago, 30-year-old Norfazli and 28-year-old Hidayat took up four years of apprenticeship as a farrier with the Singapore Turf Club’s STAR (Singapore Training Academy for Racing) Programme. They studied the anatomy of a horse’s foot, picking up the skills of forging and shoeing and undergo On-The-Job-Training with senior farriers at the Club.

Before Norfazli and Hidayat became farriers, the two Sembawang residents worked as a rework technician and operation supervisor respectively, but coincidentally, they were both introduced to their new jobs by colleagues-to-be in this line. 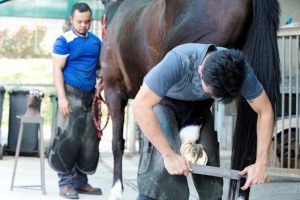 Hidayat Sudirman files a horse’s hoof with a rasp while Norfazli Satle holds the horse.

“My neighbour Masodi (Masdoki) is a freelance farrier at STC. He introduced me to the job and I thought why not give it a shot,” said Norfazli.

“My brother-in-law Zulizal (Abdul Rahman) is also a freelance farrier here, so he asked me to join him. Other than the freelancers, Norfazli and I are now one of the nine Club farriers here,” said Hidayat.

Racehorses wear shoes to protect their hooves from injuries. Shoes also have a weight-bearing function which is to spread load evenly to their feet. The duo attend to an average of about five horses a day, and doing “a set”, which means to trim and shoe all four hooves takes up about an hour per horse.

Throughout the process, they stood bent down and almost half-squatted, with the horse’s hoof pressed in between their knees while filing the hoof walls and adjusting and nailing the horseshoe.

“We would take a five to 10 minutes break in between, but we were not used to it at first, so we had aching backs and sore legs. Nowadays, we go for massages,” joked Norfazli.

“Some horses get nervous easily, some are not used to getting shod, so we can choose to sedate horses while shoeing. But most of the time, we don’t want to do so as we want horses to learn to cooperate and accept shoeing as part of their life.

“I remember a few years back when I was nailing the near hind of a horse and it got spooked suddenly, the nail poked into my palm.

“I was bleeding badly, but luckily Gary Morley (farrier) was beside me, so he helped to bandage my palm immediately.”

For Hidayat, his patience reaps reward when he sees these racehorses strut out confidently on the tracks and go on to win races.

“It’s common to get scratches and bites on the head, or even our butt sometimes (while working), but they are just bruises and small injuries,” said Hidayat.

“At the end of the day, when you see their problems solved with properly-fitting shoes and they win races, it makes us very happy.”