Track rider Mohamad Faiz rode a pony once, but at the time, had no idea if there was a difference between a pony and a thoroughbred.

The 23-year-old Singaporean had that first pony ride when he visited a riding lodge near Johor Bahru in Malaysia on a holiday a few years ago.

He was hooked, but that one ride alone did not make him go down the path as a track rider, though. 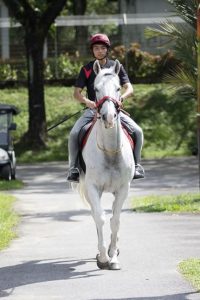 “At first I thought they (ponies and thoroughbreds) were the same, except for the difference in size,” said Faiz.

“My dad saw this STAR (Singapore Training Academy for Racing) Programme job advertisement on the papers, so I looked up the Singapore Turf Club’s website after my National Service and saw this video of a syce at work. I joined in September 2015, and completed the three months of training as a syce.

“While working as a syce, I took another six months to learn to ride properly at the riding school (STC Riding Centre) in between breaks during work. I became a track rider after getting the riding certificate in October last year.”

The young Singaporean rides three horses for trainer Desmond Koh every morning. Except for his rest day on alternate Sundays, he reports to work at 5.30am, and starts riding horses in trackwork from 6am to 10am. After a short break, Faiz resumes work in the afternoon where he would bring horses out for swims, walks and weight-taking.

“I like the feeling of riding a horse; it’s the adrenaline rush when a horse sprints, and I want to put the skills I have learned to good use, so I want to become a jockey,” said the STAR Programme graduate.

“Each horse has its own temperament, so we should listen to the trainer and regular rider’s advice since they know them better.

“I’m lucky I haven’t met with any accidents while riding, but we can’t say for sure in the future, so I’m not taking my safety for granted either.

“This job takes up a lot of my time, and I do get tired of the long hours at times, but I never thought of giving up because I love what I do.

“If you think there is an end to learning how to ride a horse, you are wrong because we’re always learning with horse riding.”